I shared my previous post on Reddit, and I got some very useful feedback which pointed out the irrelevance of what I was measuring (and also a scientific paper pointing out many statistical errors in a "real" GitHub study).

So, I figured I'd measure something more relevant: bugs.

Sadly, there is no cheap way of measuring bugs due to language. What I did was similar to the paper criticized in the paper above, but with much fewer projects (roughly 20 per language), and a much simpler pipeline.

What did I do

I have breached a few rules with Mathematica and Jupyter Notebook, because it was very difficult to find code with these constraints. Example: this is a learning/tutorial project with both R and Python.

In spite of the aforementioned limitations, I produced a pretty Matplotlib boxplot.

The boxplot boxes show the interquartile range (IQR - 25th percentile to 75th percentile). The median (50th percentile, or value that splits the data in two halves) is in red. The whiskers are not modified from the default whis behavior, covering data 1.5 IQRs above and below (right and left actually, in this image) the box ends themselves. Anything more than 1.5 IQRs away are outliers (marked with circles). 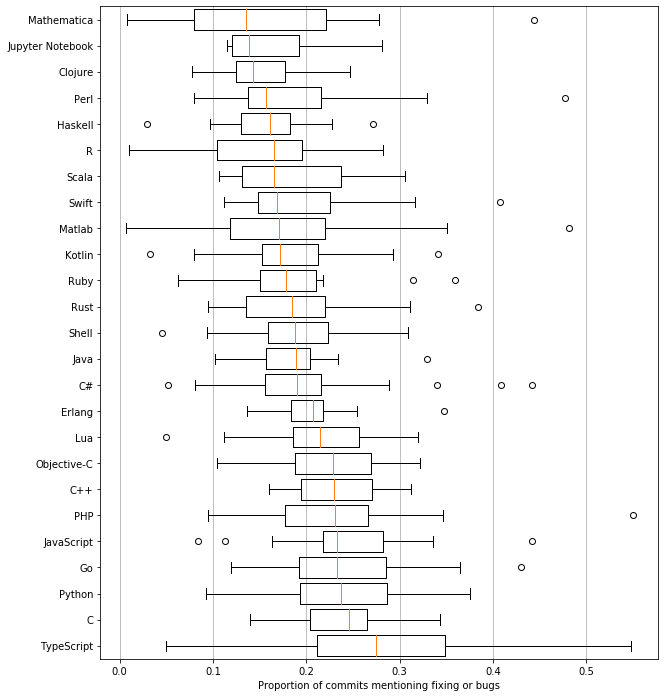 While this analysis was fun, it was not very informative. As you can see, there is significant overlap, even if we used the IQR which covers 50% of data, much less than the 95% confidence interval required for a typical statistical test. Even JavaScript's lower whisker is lower than any language's 75% percentile.

This means there is a lot of variation between projects within the same language, so much so that we can not tell which languages are better.

I added some Jupyter Notebook repositories, because I suspected Mathematica and Clojure use the REPL a lot, which I suspect leads to more testing of the code and fewer bugs committed. It seems using a REPL might have a positive influence, seeing that the median gets between Clojure and Mathematica, though again, that might not mean much - there are many "suspect" links there, and many Jupyter projects are for learning and/or presentation purposes, which might influence bugfix rates (I couldn't get around that, because there're so few with sufficient commit counts).

Still, I think I will try out Clojure. The low fix rate (~14% of commits compared to Python's ~23%) might mean I'll learn something.

As usual, you can find the Jupyter Notebook on my GitHub repository.